One of the biggest struggles that I see holding back bloggers from massively succeeding is their business mindset.

Read through Kim’s interview below to learn about the business mindset shifts Kim made, advice she may have and how you can repeat what she has done to finally reach an $1,100 launch!

Kim is an experienced blogger who sells commercially licensed printables for other bloggers to resell. Her income was stuck at such a low rate that she was questioning whether she should continue with her business.

Knowing that she needed a coach, Kim took the leap and joined the Monetization Accelerator Program, worked on her blogging and business mindset, got clear on what her avatar really needed and began seeing results.

How did you get into blogging and selling printables?

I had a job that required me to work 60+ hours, where I was also commuting all around the US quite a bit. Some days would literally be 12+ hours long!

I decided I needed SOMETHING, a creative outlet, SOMETHING, so I began blogging. Little did I know, there is actually so much work that goes into blogging.

Over time, during my trial and errors, I realized my husband does graphic design and illustration. He could be a part of what I’m doing.

I had Jeremy [my husband] create the printables for my blog and we were receiving great responses to them. This was great for me to have someone to help me.

Jeremy has taught me a lot of graphic design since then but he still creates a lot too. We decided people need help, as it’s time consuming if you want to do things right versus throwing something together quickly that may or may not have a reaction with your clients.

We also have realized that a lot of avatars are more visual and won’t opt in if your stuff just doesn’t look good, regardless of how great their offers are. 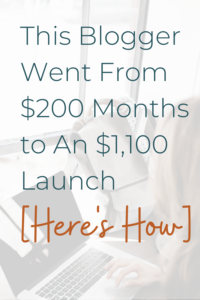 What is the difference between a printable and a commercially licensed printable?

General printables could be PDF documents of like a planner, your opt in for your blog, checklists, etc. These would be something people can print at home and physically utilize the content, not to just look at on the screen.

For commercial printables, we create the design and put in all the thought in for all the content.

This allows our clients to not have to do a ton of research, we figure that out for them with trial and error and put a design on top of it.

All clients have to do is purchase the design, download it and put it on their website to start selling (or giving it away for free) to their audience. The license allows clients to make a profit off of our work, as it’s now their work.

Before getting “unstuck” where were you getting stuck?

Some months brought in $200, I would never go over $200 but I did have one month where someone bought about $400 worth of product. That was awesome but I never thought that would happen again and it didn’t!

Where I got stuck a lot is that I would follow people and try to mimic what they do to sell printables.

The problem was that they weren’t selling commercial printables, so we didn’t have the same audience. They understood their audience for personal printables and copying that didn’t bring me any results.

What was the moment you knew you wanted outside feedback?

A lot of hormones during my pregnancy!

I told Jeremy, I really want this to work because I hate my day-job. I didn’t despise it, but it was not a creative outlet, it’s not helping people I want to help, it was just helping my boss’ pocket. Just hoping it [the printables] would work wasn’t enough.

I was following Alison for quite some time and finally reached out a week or two before my daughter was born, haha. It was killing me! I was putting in so much effort and getting like 0 return, giving away so much stuff for free! Not that I don’t like giving out stuff for free, but I was getting NO feedback. People would just take and take and take.

What changes did you start making that led to this $1,100 month?

A lot of it was based on business mindset shifts and market research.

I was originally basing it off of what I liked and not really what my audience liked. A lot of minimal styles are the primary style everybody likes, so now we’ve been focusing more on that.

I had to change my mindset regarding money. Instead of constantly giving away things for free, I had to start putting price tags on. I also had to stop piggybacking on others’ success, I had to be more me.

I came to these realizations in the beginning of Alison’s Monetization Accelerator Program.

Then, I needed to take a step back and realize that I was copying other people and not being true to myself and how I wanted to run my business. Listening to Alison’s advice on how to get something viable out there, I just did the work instead of getting sucked into other coaching and programs.

I was a part of a bundle recently.

My email list was only 330 people long, and after the bundle I had about 2,000 people on it. Join bundles if you can. The people are already an ideal avatar because they signed up for this bundle that you’re already a part of.

I did a rebrand of everything. Although I like bright colors, I know other people aren’t a huge fan of them.

When you have less, people are able to imagine your product on their site. If I used colors that don’t match well with their products in the background, they would get turned off by it. I also sent daily emails throughout the time period of my launch, which helped a lot. I added a store-wide discount and a new product that I featured. Half of the income was from the discount and the other half was the new product.

What would you tell people who are stuck like you were?

Implementation is the hardest when you start with blogging.

Shiny new ideas pull you in 50 different directions, listening to different opinions. I spent 3 years blogging and only really started making an income now. By focusing and honing in on something I needed to get done, through getting a coach, I grew my income quickly.

I think getting a coach is vital if you can afford it. Listening to one person is better than listening to 5 different people you may look up to, because that means 5 different opinions no matter how similar.

The people you look up to won’t hold your hand and guide you through it all the way, which is why I kept getting distracted and going to the next shiny object instead of just mastering one.

My advice is just to focus on what you want. I think the best way is to get a coach!

Kim was able to have such a successful launch by really diving into her business mindset and market research instead of trying to mimic similar businesses, focusing on one strategy, income stacking and getting feedback from a coach. Her biggest piece of advice was to be you!